Home » 6 Places to Sightsee from a Segway
Trip-tips

6 Places to Sightsee from a Segway

Got teens? Here’s an exciting and green way to explore. 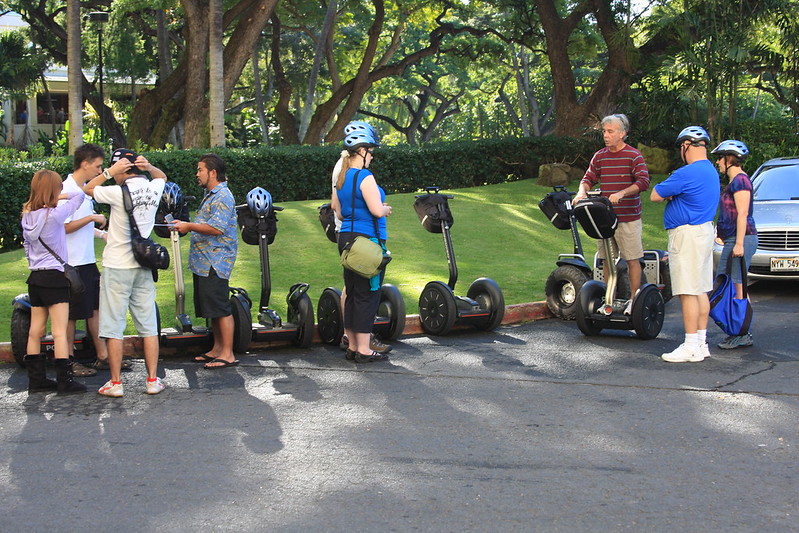 Do bus tours elicit a bored yawn from your teen? Lose the window seat and see the sights standing up on a Segway.

Segway tours have popped up in all sorts of places—cities, beaches, and even forests—and offer a fun and eco-friendly way to explore, along with some key advantages over more traditional sightseeing tours. A Segway “personal transporter”—essentially a two-wheeled stand-up motorized scooter—can get you closer to sights and attractions than on a bus tour, while covering more ground than a walking tour.

Ready to roll? Most tours that we looked at have a minimum age requirement that falls between 12 and 16 years old. These six operators can turn a ho-hum sightseeing excursion into an adventure to remember.

Families with kids ages 12 and up can check out the beach scene on the three-hour Magic Island Glide Tour. There are photo ops of Diamond Head, Waikiki Beach, the dazzling yachts in Ala Wai Yacht Harbor, as well as Ala Moana Park and Magic Island, where local families enjoy picnics, swimming, surfing, and paddling. Or opt for the two-hour Sunset Tour, which whizzes through downtown Waikiki, taking in the Honolulu Zoo and Kapiolani Park before cruising up to the historic Diamond Head Lighthouse and the Amelia Earhart lookout just in time for an aloha sunset.

Conveniently based across from Navy Pier, this operator shows off an impressive number of the Windy City’s top attractions on a two-hour day or night tour. Families with kids ages 13 and up can join the Lakefront and the Museum Campus Tour, which breezes along the picturesque Lake Michigan waterfront, zips to the Shedd Aquarium, and rolls through Grant Park, home to the much-photographed Buckingham Fountain and Agora cast-iron leg sculptures. Along the way, guides share fun facts about Chicago’s history and culture.

Families with kids 14 and older will remember The Alamo and more after the Ultimate Tour, which also takes in Main Plaza, San Fernando Cathedral, and HemisFair Park. Highlights include a scenic ride along the southern non-commercial banks of San Antonio’s famous River Walk and through the King William Historic District, a posh neighborhood dating from the 1850s.

Ride past the White House and other American icons in our nation’s capital on the three-hour Day and Night National Mall Segway Tour. Newbies to DC get a course in American history while even locals learn new facts and stories about Washington. Highlights include the Lincoln Memorial and a cruise down Pennsylvania Avenue with views of the Capitol Building, National Archives, Navy Memorial and the FBI Building.

Families with kids 12 and up will love off-roading through the hardwood forest north of Sister Bay on the two-hour Rough and Tough Forest Tour. The adventure begins with a ride through cherry orchards before heading into the forest, where you can keep your eyes open for porcupines, deer, birds and other wildlife.

In two and a half hours, the San Francisco Segway Tour gives families with kids 12 and older a break from hill-walking and a terrific overview of the City by the Bay. You’ll get stellar views of the Golden Gate Bridge and Alcatraz, with stops at Fisherman’s Wharf, Ghirardelli Square, the Cable Car turnaround, and Hyde Street Pier.

Mimi Slawoff, a Los Angeles-based writer, contributed this to www.MiniTime.com.