Bizarre festivals to see with the family this fall. By Katrina Brown Hunt 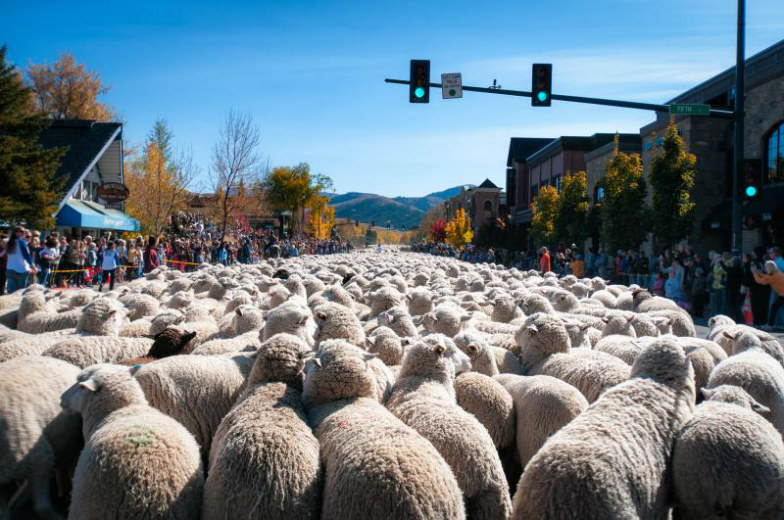 Whether you’re betting on speeding coffins, tasting teriyaki bear or just yelling your head off, autumn brings a sense of excitement to the kookiest festivalgoers.

Strolling through pumpkin patches, picking apples and navigating corn mazes are the hallmarks of a classic fall festival — depending, that is, on how you define “fall festival.”

In some towns across the U.S., the best autumn festivals focus on hairy spiders or sampling the flavors of road kill. Here are 7 off-the-wall fall festivals that make for a downright odd (but still family-friendly) weekend getaway: 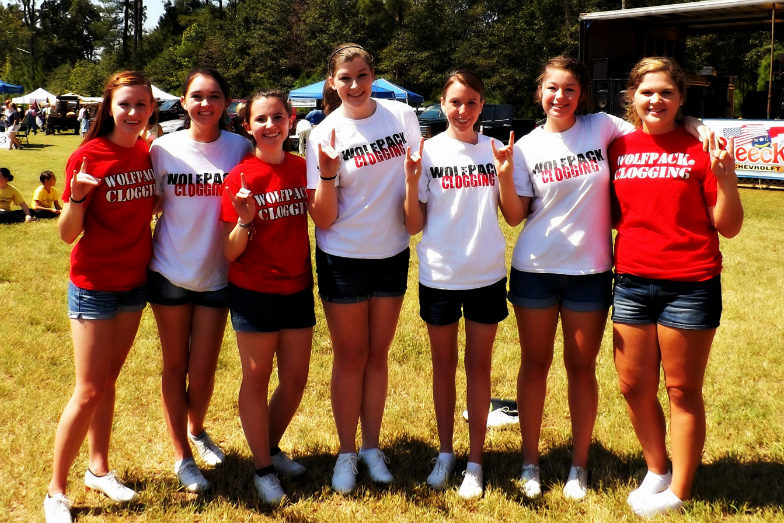 No, it’s not just about calling hogs. The folks behind this contest and festival, which started in 1969, consider “hollerin’ to be the earliest form of communication between humans.” You’ll hear hollers set to music, some meant to call in herds, and “expressive” hollers, “voiced purely for pleasure’s sake.” The festival also includes live music and a BBQ cookoff. They ask that you not bring in coolers—presumably, someone mgt holler at you if you do. $5 per adult; kids 12 and under or free; September 13. 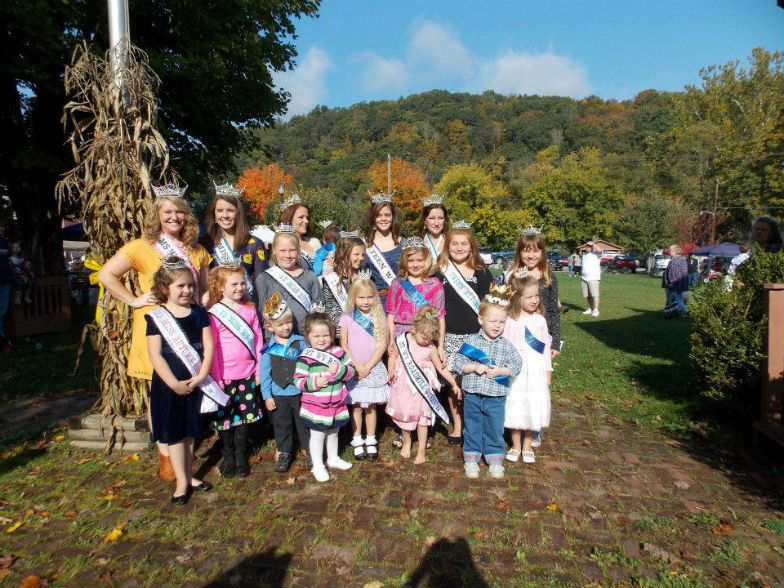 Forget bake apples and squash. Around here, fall flavors include squirrel gravy or teriyaki bear. The cook-off here requires that the main ingredient be from something that could come from the side of the road—but you need not prove that it did. (Say what you want, but it probably counts as sustainable dining.) You can sample entries with your tasting tickets, or you can be suitable distracted by participating tin the Possum 5K, which has an under-14 age division for kids. The 5K costs $20 per person; September 27.

Trailing of the Sheep Festival (Ketchum and Hailey, Idaho)

In the past century, humans have often been outnumbered by sheep in Idaho. This festival (about three hours east of Boise) observes the critters’ annual migration to the southern part of the state. The big event is Sunday’s sheep parade, where you can follow 1,500 sheep down Ketchum’s Main Street; on other days you can watch the Championship Sheepdog Trials, dg in to lamb barbecue, and hear music from sheep-loving areas such as Peru, Poland and the Basque region. Kids can learn about soap-making and wool-spinning, or create Christmas crafts. Admission to events varies: tickets to the sheepdog trials, for instance, are $2 per person (free for kids 5 and under) and the parade is free; October 9-12.

About two hours east of Dallas, Marshall claims to be the birthplace of boogie-woogie music—and it’s also home to plenty of pesky ants. The locals have embraced both at this annual festival, which features a lot of live music as well as a Fireant 5K, a cyclist-friendly Tour de Fireant, a costumed-ant-filled parade and a kids dancing contest. Free admission; October 10-11. 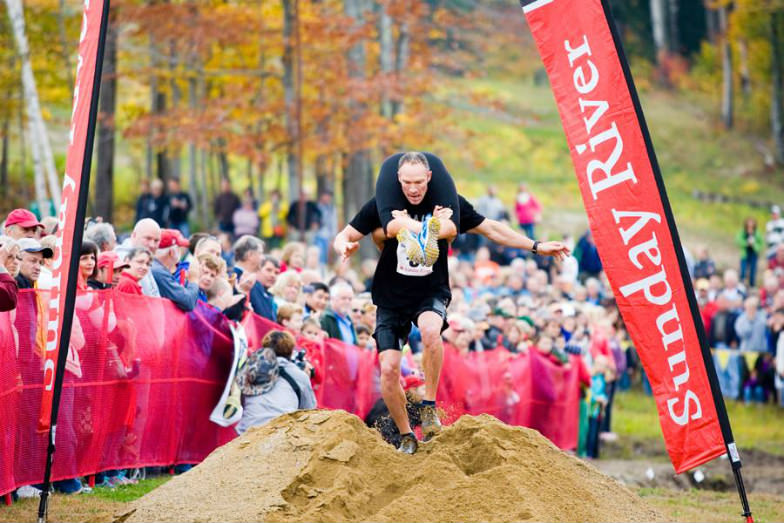 The sport of “wife carrying” began in Finland, with vaguely barbaric legends revolving around it. The thrill of the race, though, jumped the pond to the U.S. in 1999, and the North American Championship is held each year at this ski resort, about an hour from Portland. Winners take home the better half’s weight in beer and five times her weight in cash. It might be more fun to watch than to participate: entries are limited to 50, and you’ll be up against the big-league winners from smaller U.S. contests. Entering the contest costs $50 per team, watching the race is free; October 11. 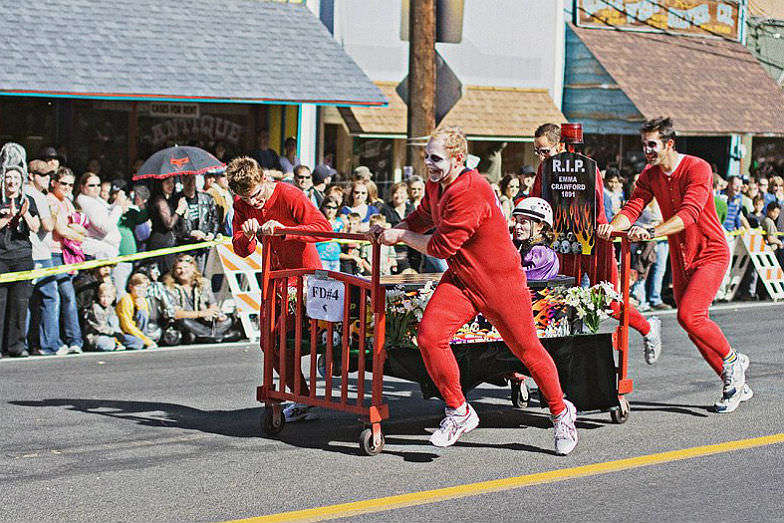 Back in 1889, Emma Crawford moved to this town outside Colorado Springs to help her tuberculosis; unfortunately, she died, and about 40 years later, her poorly-buried coffin become unearthed and slid down a mountain into a canyon. Since 1994, the town has held a ghoulish parade in her honor on the weekend before Halloween, followed by a fabulously flippant race of souped-up coffins, carried by sprinting pall-bearers, and holding costumed Emmas sitting inside. Free admission; October 25.

Sure, we’re all aware of tarantulas, but do we appreciate them enough? You can watch the hairy spiders race and otherwise celebrate them at a safe distance at this annual festival near Yosemite National Park. Festivities include a Tarantula Poem Contest, a Scream-Off and a Hairy Leg Contest for both gentlemen and ladies. There’s also a Trick-or-Treat parade for kids, and a bubble-gum-blowing contest. Free; October 26.