Halloween-themed Disney Cruise for the kids and kids at heart

“This is Halloween, this is Halloween…” Danny Elfman penned the lyrics, Tim Burton brought them to screen, but Disney Cruise Line gave them new life with their “Halloween on the High Seas” sailings aboard all their ships in September and October. Our recent Halloween cruise on the Disney Dream was one part Haunted Mansion, one part Nightmare Before Christmas, one part Ray Bradbury’s The Halloween Tree, and 100% Disney cruise line elegance. Continue reading for more of how Disney Cruise Line plussed their entertainment offerings during this spookiest season of the year.

The mysterious caretaker gathers children around to share Halloween folklore and stories. (Disney)

The fall harvest season embraces guests, as soon as they board the ship, highlighted by a two-story Pumpkin Tree smack dab in the center of the ship’s atrium. Throughout your vacation, the Pumpkin Tree transforms from barren branches to full Jack-O-Lantern bloom, and serves as the hub of the Halloween festivities. At the base of the Pumpkin Tree, a mysterious caretaker, plucked straight from the Haunted Mansion, gathers children around to share Halloween folklore and stories, such as the Legend of Sleepy Hollow, and the Tree watches over festive parties later in the cruise. 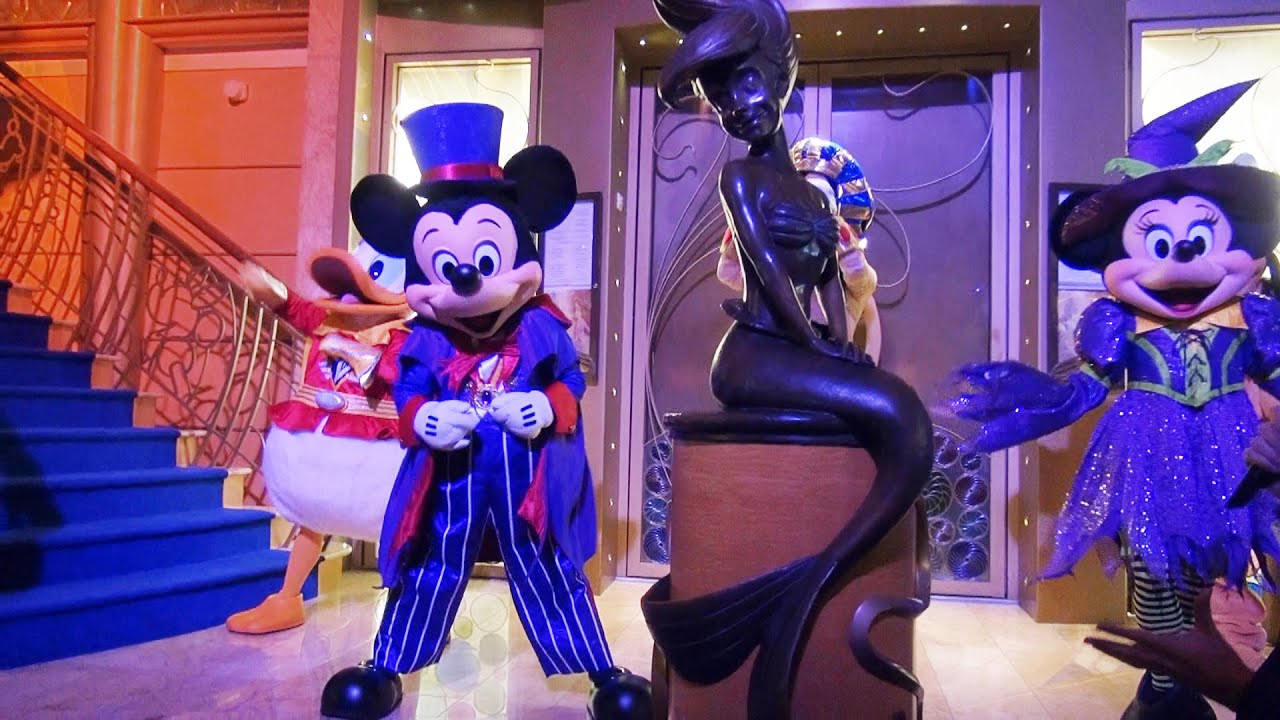 In addition to Disney Cruise Line’s signature Pirate night party, Mickey’s Mouse-querade Party rocks the ship’s atrium with Mickey and Pals leading a Halloween soiree decked out in vampire, witch, pharaoh, and super hero costumes. Plenty of candy is available for trick-or-treating at stations set up all around the atrium, and there are Halloween inspired games for families to play too. 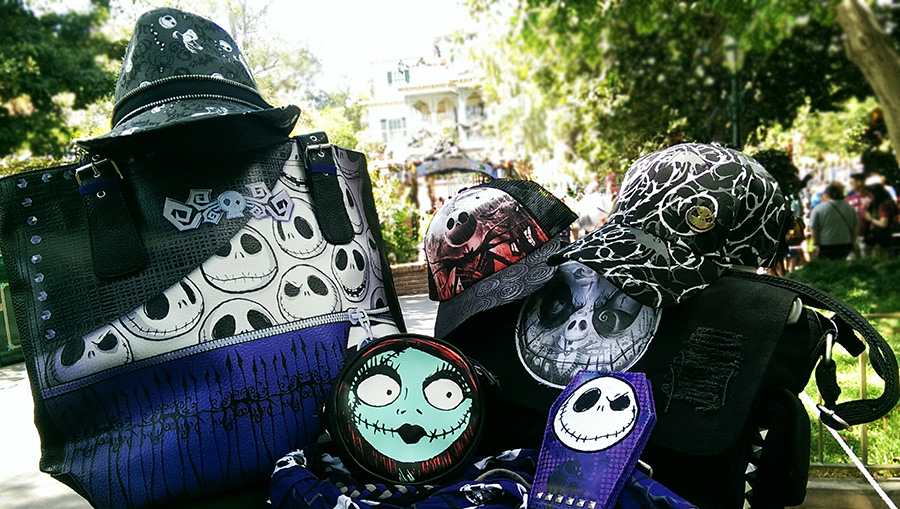 The entertainment gets spookier, but never too scary, as the witching hour approaches. Since the music from Tim Burton’s “The Nightmare Before Christmas” plays throughout the ship, so why not enjoy the film as a 4D sing and scream movie experience? On one night the movie plays inside the Walt Disney theater with fog, snow, and a special meet-and-greet with Sally and the Pumpkin King himself, Jack Skellington. For another late night chill, up on the top deck, a salty sea captain tells “Haunted Stories of the Sea” by the light of the moon. The show’s supposed to give a cruisers goosebumps, but the tongue-in-cheek scares elicited many giggles and laughs from our family – lots of fun! 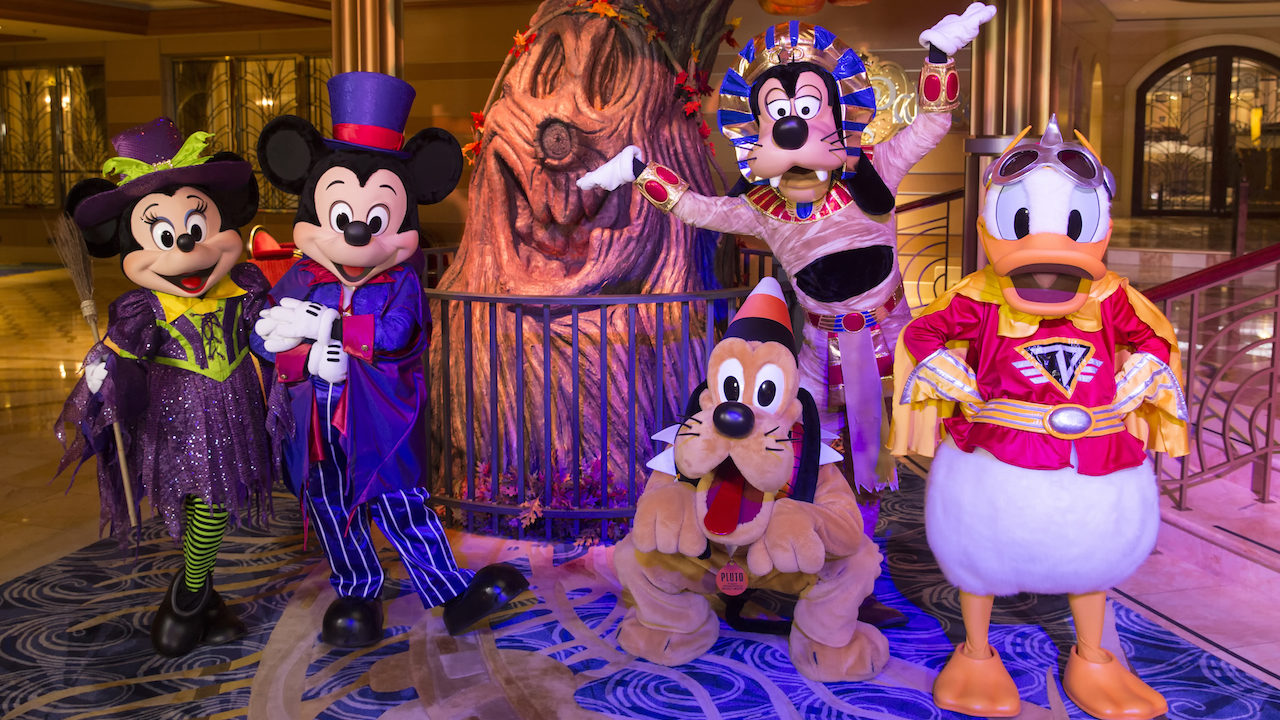 Halloween on a Disney cruise isn’t just for kids. (Disney)

Finally, to prove Halloween Isn’t Just for Kids, the adult entertainment district hosts a late-night costume competition complete with a “Villainous Takeover” of the dance floor that’s a definite Thriller.

(MORE: Skipping the high seas this year? Stay on land and find the best Halloween events in the US.)

In addition to these scheduled events throughout the Halloween on the High Seas cruises there’s holiday themed decorations, activities, crafts, food, and music found in the kids clubs, restaurants, and all over the ship. Disney Cruise Line’s Halloween on the High Seas event began on the Disney Dream in 2013, but expanded to all four ships this season. There’s every indication this will be a continuing tradition each September/October for years to come.

The trick-or-treating, dance party, and Disney characters dressed in Halloween costumes will surely appeal to kid cruisers, but families who enjoy Mickey’s Not So Scary Halloween Party at the Magic Kingdom will love to extend the holiday festivities aboard the ship. Returning cruisers looking for something new and different aboard the ship will also enjoy Halloween on the High Seas. Finally, even if you’re not particularly looking for a Halloween experience, September/October is a great time to cruise, and you can often find deals in the shoulder season between summer vacations and the winter holidays. The Halloween on the High Seas events don’t replace any of the normal shows, entertainment, or typical Disney Cruise Line experiences – so you get even more bang for your buck.

10 Free Things to Do with Kids in San Francisco