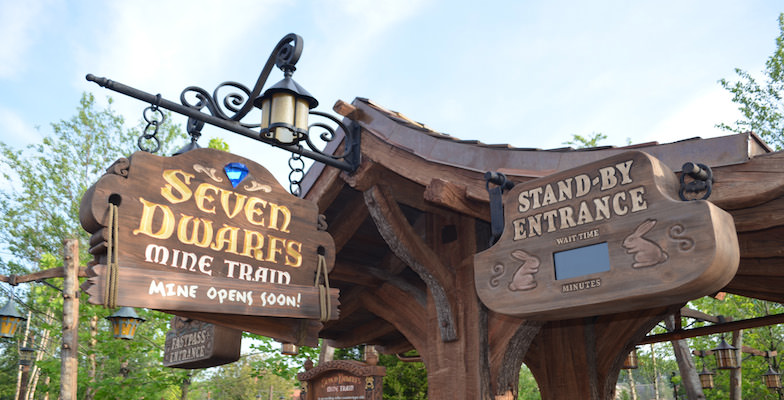 The largest expansion in the history of Walt Disney World’s Magic Kingdom is now complete, and New Fantasyland finally has its crowning jewel – Seven Dwarfs Mine Train, a swingin’, swayin’ family roller coaster that takes guests inside the mountain where “a million diamonds shine.” The ride is a fantastic addition to the Magic Kingdom, filled with state of the art 3D audio animatronics, and enough speed and height to thrill the little (and not so little) ones, but this is NOT a roller coaster. No, in Seven Dwarfs Mine Train, Walt Disney Imagineering has created the first STORY Coaster. The attraction officially opens to the public on May 28, 2014, and visitors to the Magic Kingdom this summer will surely be lining up to ride.

Disney has done an amazing job creating a wooded hill and glen hidden inside a bustling theme park, and Seven Dwarfs Mine Train takes you through key elements of Snow White and the Seven Dwarfs from a perspective never before told – the Dwarfs’. Their story unfolds as you wind your way through the queue and continues throughout the ride.

On the stand-by entrance side, Imagineering created an interactive queue filled with games to entertain families while they wait and also to set up the story. Kids learn about the mine, that Doc’s in charge, and he gives directions to all the interactive elements: sort gems in a sluice; wash them with a “musical” spout; and enter the mine’s vault to spin barrels where kaleidoscope projections appear on the ceiling. The Dwarfs are master woodworkers, and throughout the queue and attractions are intricately carved details and animals. 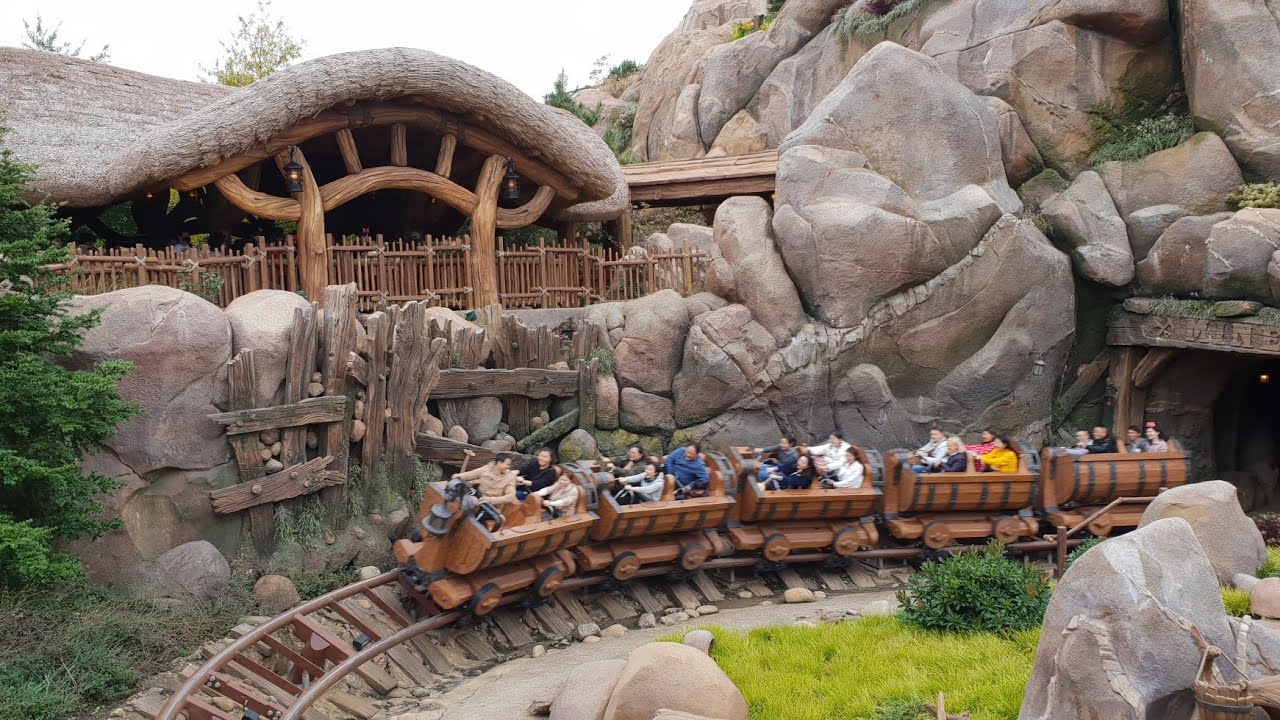 The coaster’s mine cars are swinging ore carts, just like one pictured in the film. The seats are a little snug with individual lap bars that might be constraining for larger folks. Once everyone is loaded, you’re off to the mine via a quick 30-foot drop and whisk around a bend. The ride is smooth – ultra smooth – any jerks and jolts buffered by the swinging mine car. Before you know it, you’re climbing the first hill towards the mine – look out for vultures and boulders, homages to the Snow White film and original dark ride.

Once inside the mine, the cars slow for the “dark ride” portion of Seven Dwarfs Mine Train. Dopey pops up with starry diamond eyes, and all around you dwarfs and animals work and sing “we, dig, dig, dig…” reproduced in state-of-the-art animatronics.

Lifted straight from the film, a clock signals the end of the Dwarfs’ shift, animals strike the anvil, and Doc calls out “Heigh-Hooooooooooo!” The Dwarfs switch to their marching song, “it’s home from work we go…” and we creep up the final lift hill while Dwarfs’ shadows march and sing-along beside us. 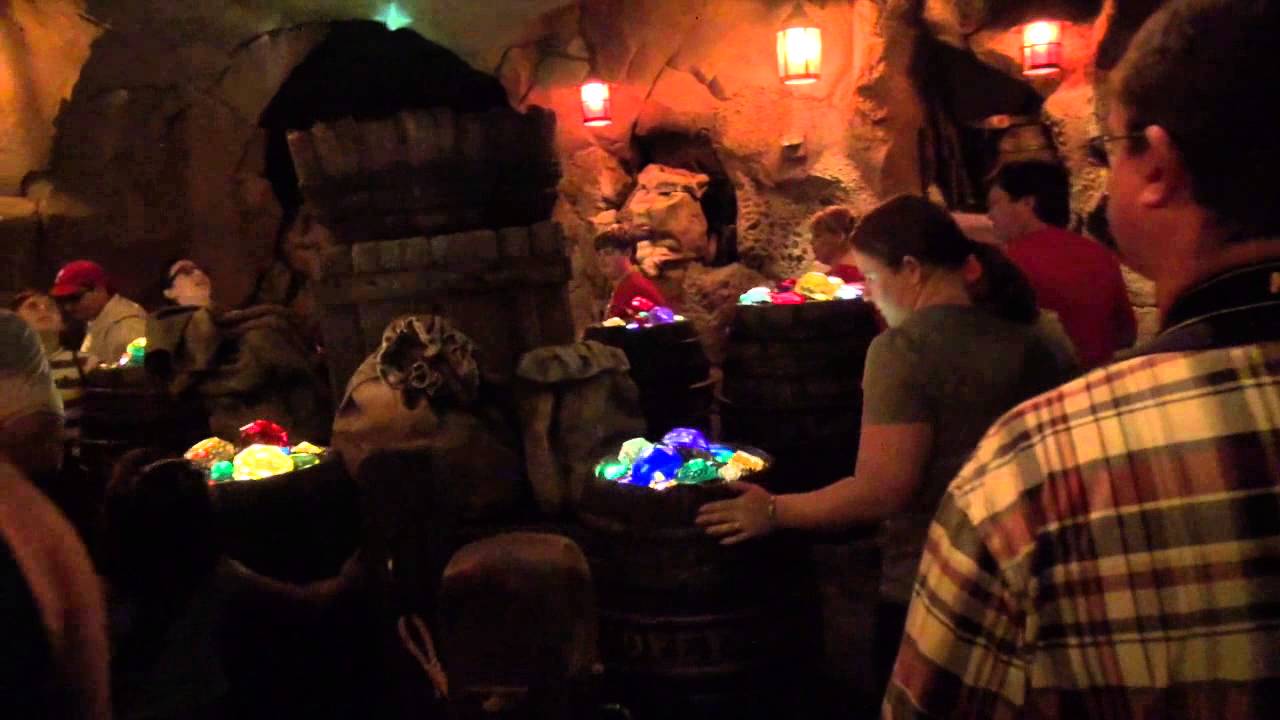 Crest the hill and it’s down the “big drop” – not huge (a little over 40 feet), but steep and fast enough to give a thrill. Intensity-wise, Seven Dwarfs Mine Train falls somewhere in-between Goofy’s Barnstormer and Big Thunder Mountain Railroad [a little higher than Goofy and lower than Big Thunder]. Younger kids may be nervous about the hill and drop, but will feel proud of their accomplishment once tackling it – and one step closer to Big Thunder Mountain Railroad and even bigger coasters.

Just before entering the unloading platform, we arrive at the Dwarfs’ Cottage – “a small house, just like a doll’s house.” Peering inside we finally see Snow White dancing with the Dwarfs in the musical sequence taken right from the film. Intricate details abound in and around the Cottage – owls carved into the ends of the beams and stairs and handmade whimsical musical instruments played by the Dwarfs (including Grumpy’s pipe organ). Beware, while there’s frolicking inside the cottage, just outside evil lurks. Our last view, around the corner of the far wall, is the Wicked Queen in her disguise as an old hag watching through a cottage window. She turns toward the train as it passes, and cackles wickedly. 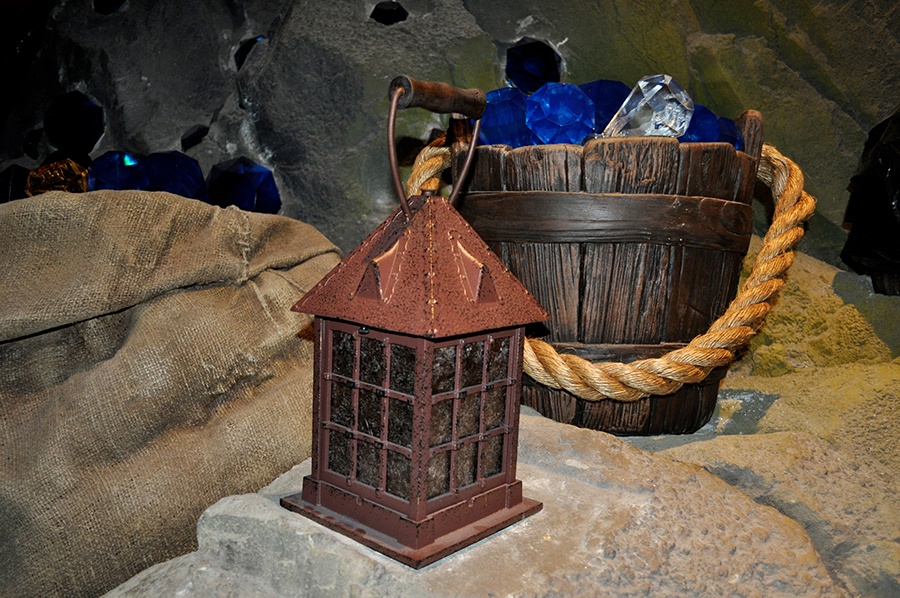 With its 38” height requirement, Seven Dwarfs Mine Train is a ride the whole family will enjoy. The coaster is smooth, not too intense, but still thrilling. You can take the 3 ½ minute train ride again, and again, and again over its 2000 feet of track to see all the details packed within the mine sequence, or just gape in wonder at the audio-animatronic Dwarfs. Make your Fastpass+ reservation now because Walt Disney Imagineering has a winner with this centerpiece of New Fantasyland. But please, don’t call Seven Dwarfs Mine Train a roller coaster – it’s a full STORY coaster.