Games to play with kids while on the road By MiniTime 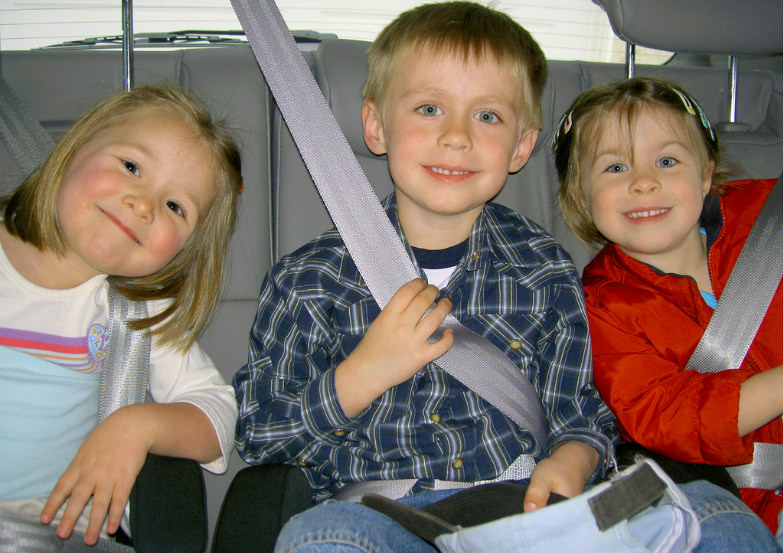 Fun and games entertain the kids during a road trip. (Flickr: Tim Samoff)

Rear-facing car seats actually make your job as on-the-road entertainer much easier, since you can sit next to your little one and interact with them face-to-face. Bring along a small mirror and marvel at the joy your child finds in their own reflection. Try mimicking your baby’s expression and making different faces and emotions.

Just because a game is simple doesn’t mean it can’t be fun. With Banana, anyone who spots a yellow car shouts “Banana!” and gets a point. You can play to a certain number of points, play until the next rest stop, or just for as long as you’re on the road (at least, assuming it’s a short jaunt to Grandma’s house and not a cross-country odyssey).

Kids who like riddles love this one. One person begins by saying “I’m going on a picnic, and I’m bringing…” and then whatever they choose to bring, according to a special pattern or rule that only they know. Maybe it’s only things that are red, or things that start with the letter “G.” Other players try to guess the secret theme of the picnic by suggesting their own items to bring. The picnic planner then tells them whether or not they can bring that item based on the secret pattern. The first person to guess (on their turn) the pattern wins and gets to lead the next picnic.

In Spelling Challenge, two players take turns naming letters. A player loses the round if they finish a word or name a letter that couldn’t possibly make a word (proper names aren’t allowed). So if player one says “A,” player two will lose if they say “T” because “at” is a complete word. They’ll also lose if they answer “Z” because there are no words that begin with “AZ.” Play this a lot and you may find your kids expressing a newfound interest in studying the dictionary for arcane stumpers.

Questions is a game that seems easy but can quickly become devilishly difficult. The rules are simple: Players must take turns asking each other questions (in some rules, only yes/no questions). Any player who hesitates, laughs or actually answers a question loses. The game can be played for points or the bragging rights of not getting disqualified. Of course, the best way to win is to get into your opponent’s head: “Are we still playing?” “Did you just hesitate?” “Do you think we can pull over soon for a bathroom break?”

Keep the stakes low: Preventing your kids’ boredom isn’t very helpful if you replace it with temper tantrums. Make sure that any road games don’t get too competitive. Keeping it silly and casual should keep a long trip from seeming even longer.

Know when to fold ’em: If a game starts to drag or you start to lose the attention of your players, don’t try to force an attention course-correct. If a game isn’t providing the boredom-fighting power you need, switch it up with something different or take a break.

Pave your own road: Sometimes, rules are meant to be broken (just don’t tell your kids that). In other words, go ahead and tweak the way you play. You may discover a completely new and improved way of playing the Picnic game. And the only thing kids love more than playing games is playing games that they’ve had a hand in inventing!