Explore the attractions at Universal Orlando’s Diagon Alley before it opens! By Dave Parfitt 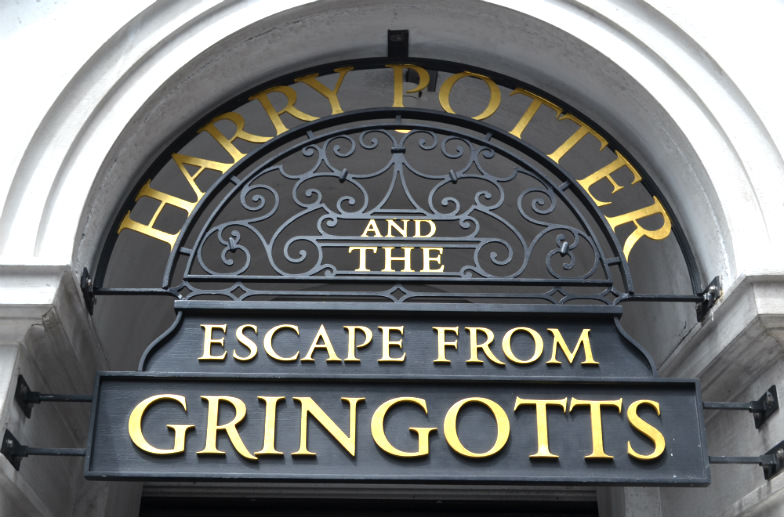 Harry Potter and the Escape from Gringotts at Universal Orlando (Credit: Dave Parfitt)

Without a doubt THE most anticipated family-friendly theme park addition in the United States in 2014 is Universal Orlando’s Wizarding World of Harry Potter – Diagon Alley. When the original Wizarding World debuted at Universal’s Islands of Adventure theme park four years ago, massive crowds flocked to the land and the thrill hasn’t waned since. This latest expansion, scheduled to open July 8, 2014, will double the size of the Harry Potter area at Universal Orlando Resort.

Universal Orlando worked side-by-side with author J.K. Rowling and Harry Potter filmmakers Stuart Craig and Alan Gilmore to create one of the iconic settings from the stories: Diagon Alley, where Harry Potter got his bespectacled glimpse of this wondrous magical realm. Because Diagon Alley was hidden from Muggles (humans) in the heart of London by magic, Universal created an elaborate London façade with traditional row houses, the Wyndham Theater, and King’s Cross Station to also hide the Wizarding World of Harry Potter – Diagon Alley from prying eyes. 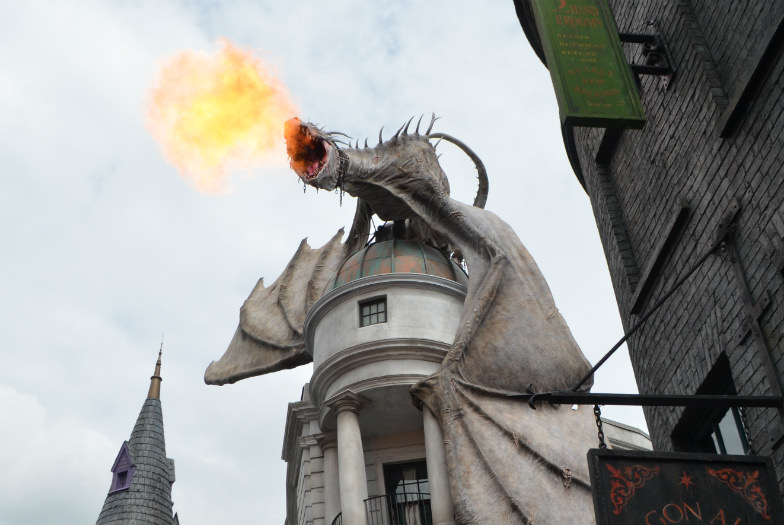 Once inside Diagon’s boundaries, the centerpiece attraction is Harry Potter and the Escape from Gringotts. Muggles enter Gringotts Bank (beneath the fire-breathing dragon) to find an opulent marble lobby with crystal chandeliers and filled with currency counting Goblins. 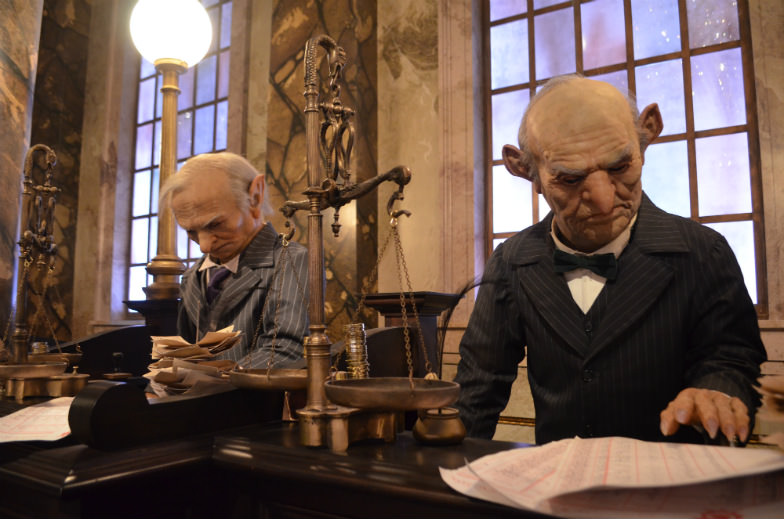 After descending into the vaults, you embark on the journey that Harry, Ron, and Hermione took to steal a Horcrux from Bellatrix Lastrange’s vault, but veer on a different way from our young heroes to steal a magical item to defeat Lord Voldemort. Warwick Davis, who plays the goblin Griphook in the Harry Potter films, features prominently in the attraction and called the Gringotts ride brilliant.

Note: there is a 42” height requirement, and the seats for this attraction are a tight fit. Harry Potter and the Escape from Gringotts uses sets, 4K digital high-def animation, 3D projection, and live effects to create a fully immersive thrill-ride experience. 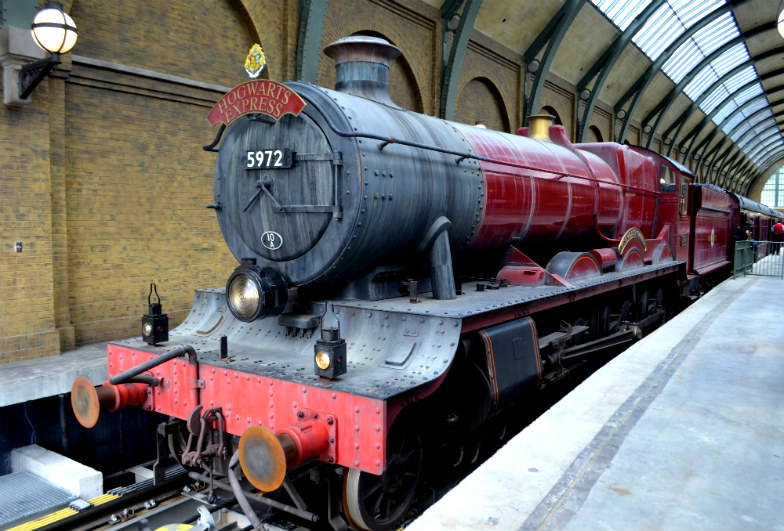 Diagon Alley’s second attraction connects the two Wizarding Worlds as well as the two theme parks, thus requiring a 2 park ticket. Of course in the Harry Potter books, Diagon Alley’s set in London while the Hogwarts School is located near Hogsmeade in Scotland – just a train ride away on the Hogwarts Express. Universal Orlando recreated the Hogwarts Express journey from London to Hogsmeade (and back). Your trip begins at King’s Cross Station, passing through the wall at Platform 9 ¾ to find the red locomotive billowing steam, whistling, and waiting for passengers to board. Family and friends receive their own private cabin and watch the adventure to Hogsmeade unfold outside the window. State-of-the-art special effects allow Buckbeak the Hippogriff, Hagrid, and the Weasley twins to all fly-by outside your cabin. Actor Robbie Coltrane (Hagrid) loved the Hogwarts Express and noted his surprise when, “there I am (as Hagrid) on a motorcycle and it takes off like a rocket.”

However all is not pleasant as the Wizarding World’s raging battle against Voldemort and his Death Eaters impacts the Hogwarts Express and brings the frightening and frigid Dementors up close.

The Hogwarts Express was perhaps my favorite attraction in The Wizarding World of Harry Potter – Diagon Alley, fantastic for the whole family, comfortable, cool, and surprising. You will experience different scenes, images, and a slightly different journey depending on your destination (Hogsmeade or London).

Note: the wait for this attraction will be long and the queue at King’s Cross Station is well-themed for a London train station but not interactive at all (lots of switchbacks and brick walls). Families will have to exit the train at the Hogsmeade (Islands of Adventure) station and wait in line again for the return trip back to Diagon Alley. 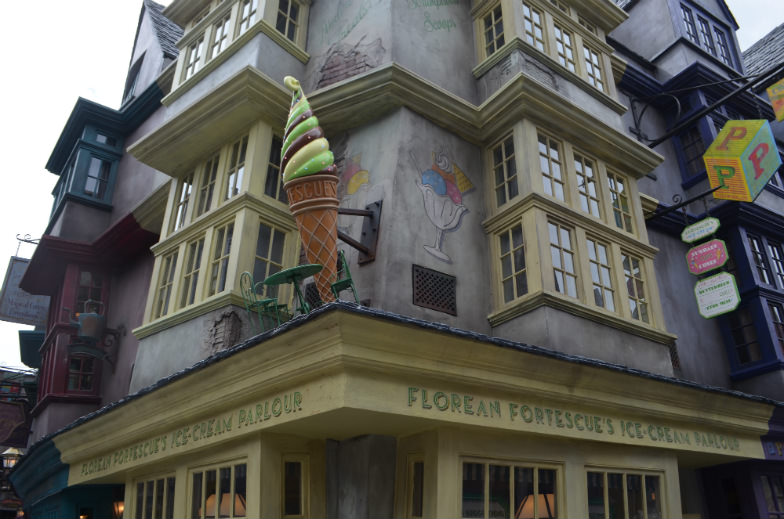 The Wizarding World of Harry Potter – Diagon Alley is much more than just two attractions. Wizards and Witches (both good and bad) fill the streets of this bustling, vibrant, city community. Guests need to make sure to take time to savor the details recreated in this area. Catch a performance of the singing sensation Celestina Warbeck and her backup group the Banshees, or watch a group of street performers act out The Tales of Beedle the Bard (the Tale of the Three Brothers should not be missed). Exchange Muggle currency for Gringotts bank notes used in shops throughout the Wizarding World (and the Universal Orlando Resort world too) such as Weasleys’ Wizard Wheezes or the greatly expanded Ollivanders: Makers of Fine Wands since 382 BC. Dine on traditional British fare at The Leaky Cauldron, sip a draft of Butterbeer or Wizard beer, or enjoy a cone of delicious ice cream at Florean Fortescue’s Ice-Cream Parlour (the Butterbeer ice cream is rich, custard-like, soft-serve, YUM!).