Love dolphins? You’re not alone. Throughout history, the dolphin has been one of the most beloved animal species to people around the world. And in recent years, the opportunity to interact and swim with dolphins has become an increasingly popular vacation activity. These programs have become a fixture at marine parks, on cruises and, increasingly, at individual resorts. Sold on the idea of a dolphin encounter? Your kids will get more out of the experience if they do a bit of light research before you go. Encourage them to check out the dolphin articles on National Geographic Kids and Animal Planet.

On a recent trip to southern Florida, our correspondent, Kris Wurl, and her family were excited to test-drive both dolphin interaction programs at the Seaquarium. Kris and her youngest son, Corey (6), tried out the Dolphin Encounter while her husband, Derrick, and their sons, Luke (9) and Kieran (8), experienced the Dolphin Odyssey. Here’s how the two programs stacked up:

Location: Dolphin Harbor, the Miami Seaquarium’s shiny-new, state-of-the-art dolphin facility. Both dolphin encounters take place in a special dolphin pool, which has two shallow ends (about 2.5-foot deep) and a deep middle, where the dolphins perform their tricks.

Duration: Each dolphin interaction lasts approximately 90 minutes, including about 45 minutes in the water.

Group Size: Maximum of 14 participants for each program. Participants are broken into smaller groups in the pool, with one dolphin trainer for every three or four guests.

Cost: Dolphin Odyssey: $199/person for shallow-water interaction and dolphin ride. Dolphin Encounter: $139/adult, $99/child 5-9 for shallow-water interaction only. Note: Family members who do not participate in the dolphin program are charged $43 to observe the Odyssey and $40 to observe the Encounter. You need to book in advance; changing your date will incur a $25 penalty. Parking costs $7.

Bonus: Prices for the Odyssey and Encounter include admission to Miami Seaquarium, which normally costs $32.95/adult and $25.95/child 3-9. (“The Seaquarium is a nice, tidy park with some good shows, but it’s small—definitely not on par with the big Orlando parks. Though Dolphin Harbor is brand new, the rest of the park is old and in need of upgrades. We enjoyed the dolphin and sea lion shows.”) Minimum Age: 5 for the Dolphin Encounter. To participate in the Dolphin Odyssey, children must be at least 52 inches (4 feet, 4 inches) tall. (“That minimum height makes sense because you need the strength and height to hold on to the dolphin’s dorsal fin for the ride.”)

Prep Work: After registering, you get changed into wet suits and then watch a 20-minute video about dolphins until the trainers arrive. (“There turned out to be two different videos. The video shown before the Dolphin Encounter gave a general background about dolphins. The video shown before the Dolphin Odyssey was much, much more interesting. It highlighted how intelligent dolphins are and showed how dolphins are trained. We were amazed that a dolphin can be commanded to decide on its own which trick it wants to do next, communicate the thought to its fellow dolphins, and then execute the feat as a group, in perfect sync!”)

The Real Fun: During both the Odyssey and Encounter, each trainer works with three or four participants and one dolphin. As the dolphin floats beside the group, the trainer points out different parts of its anatomy and injects interesting facts, like how each dolphin tail is unique. Each participant then has the opportunity to pet and feed the dolphin, give it kisses, play catch with a ball, and command the dolphin to do tricks using hand signals.

Wow Factor: In the Odyssey, each group member takes a turn riding on the dolphin’s back while holding on to the dorsal fin. Dolphins are matched with participants so that stronger adults might get a faster ride than children. The ride begins in one shallow section of the pool, crosses the deep middle of the pool, and finishes in the other shallow end. (“Though each ride only lasts 15 to 20 seconds, it is very exciting! The staff and other participants are all encouraging, cheering, and clapping.”) 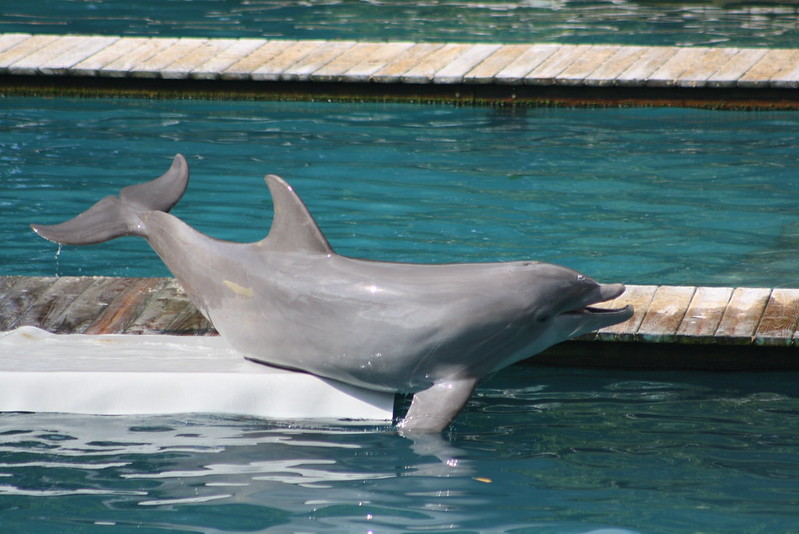 Need to Know: If you opt for the Dolphin Encounter, you won’t stand on the floor of the pool. Instead, you’ll stand on a ledge at the edge of the pool in knee-deep water. You’ll get to pet, feed, and kiss the dolphin, play ball games, and make it do tricks with hand signals, but you will not be side-by-side in the water with it. (“I was expecting that the dolphin would swim around us as we stood in the pool. Standing on the ledge made us feel a bit removed from the action. The Encounter would be a much more exciting experience if participants had the option of standing on the pool floor.”)

What to Bring: The Seaquarium provides wet suits, water slippers, and towels, but you’ll need to bring bathing suits to wear under your wet suits. If you wear glasses, bring a safety strap or else leave them in the locker. No underwater cameras are permitted in the pool, but observers can take photos from the sidelines.

Ka-ching! A professional photographer is on hand to snap pictures the entire time you are in the water, with as many as 15 minutes used up posing for photos. (“While it’s great to have those posed photos later, it does eat up an awful lot of your time in the water. I would vote for fewer posed shots and more candid shots.”) Afterward, you can purchase individual photos—a pricey option—or buy a disk with all your photos on it.

Would Be Even Better If: The Odyssey included another ride for each participant. (“The ride goes by so quickly that it’s hard for kids to take it all in. Considering the price and the long prep time, it would have been great to get a second ride.”)

Verdict: No doubt about it—this is a very pricey family outing. A family of four would spend about $800 to participate in the Dolphin Odyssey, as there is no family pricing with built-in discounts for multiple family members. Still, prices are in line with what similar venues charge for dolphin encounters. This is a unique and memorable activity about which the Wurls were still talking months after their visit. The older Wurl boys were unanimous that the best part about the Odyssey was riding the dolphin (“That was so cool! Awesome!”). As for the Encounter, 6-year-old Corey was less clear cut. (“My favorite thing was feeding the dolphin! No, rubbing the tail! No, giving hand signals! No, watching the dolphin do flips!”)